I have to say, I'm hesitant about this one....
The Walt Disney Company announced today that they have partnered with James Cameron to develop lands in Disney theme parks based on the movie "Avatar" and its sequels, slated for Christmas 2014 and Christmas 2015. The first land has been planned for Animal Kingdom, and is anticipated to begin construction in 2013 and will take about five years to complete, according to Tom Staggs. Staggs also said that Disney plans to add more Avatar-themed lands to other parks but did not announce any other specifics.
Like I said, I honestly don't think highly of this idea, though I usually try to reserve judgement until I see more, especially with Disney. I saw Avatar in theaters without really knowing any of the hype of the film, especially the 3D aspect (unknowingly saw it in 2D), and I thought it was pretty good. The visual effects were well done at least. Upon later viewing, I could not really understand what was so amazing about it. The plot is extremely overdone and overly environmentalist, which I have heard best described as "Dances with Wolves with big blue aliens." I'll be glad for the addition to Animal Kingdom, which is incredibly detailed but somewhat lacking in attractions (which makes it a half-day park for our family), but only if it is well done. I really hope that the Imagineers will do justice to the beautiful visual design already established in AK and bring a vital addition to the park as well. If Joe Rohde; lead designer for Animal Kingdom, Expedition Everest, and the Aulani resort; is attached to the project in any way, than we can be fairly confident that it is in good hands.
For more details, head over to the Around Disney blog for The Orange County Register.
Posted by Rikua at 10:44 PM No comments:

Being both a percussionist and an avid Disney fan, all I can say is that I would love to do this in a few years.


(via the Disney Parks Blog)
Posted by Rikua at 6:38 PM No comments:

I've built up a small collection of videos recently that I wanted to share with you guys. In addition, I will give a few of my thoughts on the new Pirates movie, On Stranger Tides. I'll be following that up with a small surprise, so stay till the end (or just scroll down to the bottom there. Yeah, just like that. Good!)
First of all, World of Color was recently updated. This "new" version has a few small updates, albeit enough to apparently dub it "World of Color 1.5". Among the additions are a few new effects such as lasers and projection on California Screamin' (previously used for TRONcore) and a new expanded Pirates of the Caribbean that has replaced most of what I refer to as "the villians section". The new show transitions directly from Little April Showers to Pirates and then on to the Stampede, bypassing the Hellfire and Night on Bald Mountain sections. I really like the soundtrack for the new pirates section, and the fire is excellent. When I saw the show back in late April, the Pirates section then had little use of fire, and instead used it during the Hellfire scene. I like this use of it much better, especially towards the end of the segment (you should be able to tell what I'm talking about). The lines are used perfectly to segue between songs and add humor. I think the most impressive idea shown with this update is the possibility to update the show quietly at night and then surprise the fans with the new segement(s), making the show have more of a modular feel to it. I'm sure this opens up a new world of possibility (excuse the pun) for the show. Anyway, the video below starts off on the new Pirates segment and then continues through the rest of the show. Oh, and don't forget to watch for the addition of Tangled during "So Close".
Next, I'm showcasing two funny videos I found recently. The first of the two shows an A Capella group performing a medley of Disney tunes. While normally impressive, this particular show gets really funny around the 6:15 mark. I still recommending you watch the whole thing though, to appreciate the effort. And the guy with the afro at the beginning looks a lot like Corbin Bleu....
Next is a video of John Lasseter (who I always want to call "Lassie") of Pixar and Hawaiian-shirt fame, discussing a certain collection of his. He admits to having over a thousand of these, with around 374 in "active rotation". Anyway, I guess I watched this initally because I was either strangely interested or slightly bored at the time. By the way, this video was filmed for the San Francisco Chronicle on April 1st, and that date becomes important at 3:48 if you feel like skipping to that point.
And finally for the surprise. I actually saw this posted on insidethemagic.net before finishing this post and I thought it was too important to skip posting. It's a movie trailer for a movie coming out this Thanksgiving, and I can't really find a way to introduce it, so just watch for yourself. And enjoy.
Oh yeah, I guess I forgot about that review of On Stranger Tides. Well, I saw it Saturday night for free at the local IMAX theater, and I really enjoyed it. I think the film did a very good job booting a new trilogy, one that looks like it should end better than the last one did. The only reason I didn't particularly care for Pirates 2 and 3 was the increasingly convoluted storyline. This new film takes the series in a new direction without Orlando Bloom, Kiera Knightly, and most of the old cast and crew. In fact, I think the only characters carry on into the fourth film are Captain Jack Sparrow, Barbossa, and Gibbs. Depp's performance is once again practically flawless, and Rush and Depp continue to play off of each other very well. There are several action scenes (for what would be a pirate movie without any swashbuckling adventure?), some love scenes, plenty of humor to keep people laughing but without becoming annoying, and, unfortunately, cheap 3D tricks. I didn't see the movie in 3D, but there were several things that I could tell were pretty much disgused 3D tricks. This disappointed me the most, simply because I don't care for swords and things sticking out in my face just because they can. If done right, I don't mind, but there are very few cases of it being done right in all of Hollywood. I really enjoyed the soundtrack, as expected from the talented Hans Zimmer. He brings back many of the old themes with wonderful variations that make the tracks enjoyable again. Another great addition to the track is the use of guitarists Rodrigo Y Gabriela for a greater Spanish/latin flair to the soundtrack. As far as Blackbeard, I felt like he was a better character than Davy Jones, through still somewhat disappointing. However, I doubt this is a product of poor acting, because Ian McShane's performance is spectacular. Overall, I would rate this fourth installment as not quite as good as the first, though it comes very close, and much better than the second and third. It is definitely worth watching, and the choice of 2D vs 3D is entirely up to you.
Now I think I've rambled for long enough for a short post. And for those of you who scrolled down here just to see the surprise, shame on you! Besides, you missed it, so you're just going to have to scroll back up to the top and start over like a good little reader. See you all next time!
Posted by Rikua at 3:05 PM No comments:

The original point of this post was to provide a glipse at this new pic: 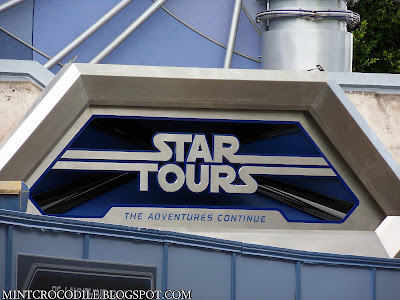 which shows off the new Star Tours sign. Pretty spiffy, if I do say so myself, and the really cool thing is how they've hidded the "From the creative forces of Goerge Lucas: etc. Go ahead, see if you can find it.... But then I thought I;d offer this glipse of the rest of the contruction on the new version of California Adventure, a park in the making. Enjoy.... 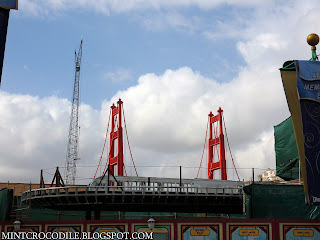 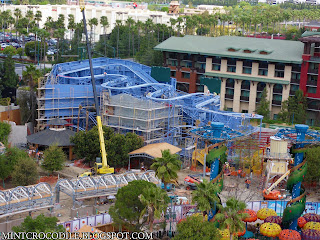 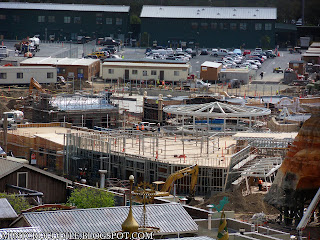 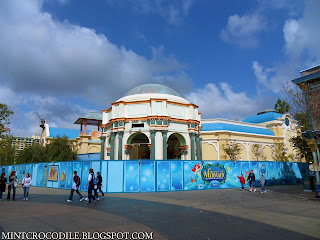 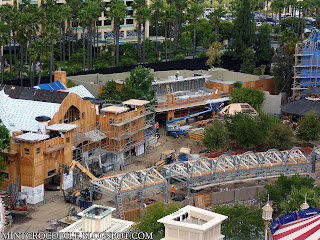 I found this interesting article over on Yesterland about the Preview Center for Disney's California Adventure before it opened. You can read more in the article, but I'll give you a bit of an overview now. The Preview Center opened around July 2000 in the exit area of the Main Street Opera House in Disneyland Park. It showcased artwork and mostly conceptual drawings of how the park would be once finished. You could also buy your very own California Adventure shirt, pre-park opening, to show off to your friends.
It's really fascinating to see the drawings for this park before it opened. Conceptual drawings are often slightly different from how they end up looking, so while it's cool to look at how the park is the same, it's even more so to see how it changed. DCA suffered from a severe lack of funding, so cuts were inevitable, but one can't help but wonder how much better the park would have done if only planned or implemented better. Go ahead and check out the article (with lots of pictures) HERE.
I'm young enough that I only know the Disneyland Resort as it is now, and my earliest remembered trips to Disneyland always included DCA. I don't remember ever having been to Disneyland with a big parking lot right outside the gates, but rather the long tram ride to the gates from the large parking structure at the end of Downtown Disney. Whether I missed out on experiencing the original DLR, it's still great to be reminded from time to time of how things were as we look forward to how things will soon become.
P.S. I hope you're having a better day with you read this, Sis.
Posted by Rikua at 6:36 PM No comments: