Rebirth of a Park 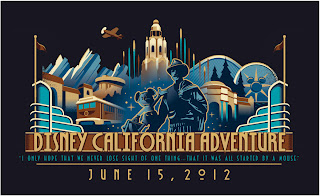 Well, I'm about a week late to coming to the party, but that's okay, isn't it?  Last Friday, June 15th 2012, Disney('s) California Adventure park reopened to a brand new experience over 5 years in the making.  If any of you remember, some of my earliest posts were about the changes coming to Paradise Pier.  And now, many many years later (and very few blog posts....), all of the construction walls have finally come down to reveal how Disney has done in rebranding what was originally considered a dud to both public and company alike.

However, this post isn't about the changes that were made, although that is still a possibility for a later post.  Rather, I wanted to spend this time talking about my personal feelings regarding the park.  I have been to Disneyland when there was a parking lot there instead of the way things are now, but I was much too young to remember it.  My earliest memories of visiting Disneyland come from 2003, the year that my family bought annual passes and made the 6+ hour drive down to the parks several times throughout the year.  I think for that reason, I actually have a great nostalgia for the way things were at California Adventure.  I find this to be true for many of the memories of childhood we cherish and hold on to as adults.  The same could be said for the changes to Disneyland in this same almost-decade-long time period, but the changes to DCA have been much more significant and memorable.

Back then I remember pride in the giant letters spelling out the name of our state, thinking that the Golden Gate is much bigger in real life, wonder at Grizzly Peak and not understanding that it was fake.  Back then, there were shows other than Aladdin at the Hyperion Theatre and nothing behind it.  There was a land based on farming rather than Bugs.  Grizzly River Run and the play area across from it were only loosely themed but I didn't care.  I felt so many things much more than I did at home; wonder, excitement, and fear.  Lots of fear at everything.  I don't know what it was that made me so unwilling to try anything (I will say that I was still fairly young at that age), but I hadn't yet realized that Disney equals safe, for the most part.  I was scared of Soarin' Over California, I was scared of the "Giant Orange Swings", I was even scared of It's Tough to Be a Bug (having had bad experiences on Honey I Shrunk the Audience).

However, I was most scared of the giant looping roller coaster that dominated the far edge of Paradise Pier.  In fact, I still vividly remember the scene of telling my mother, while on King Triton's Carousel (because carousels are always safe) that I did not want to go on "that".  At this point, I could barely even go on roller coasters, and Big Thunder, Space Mountain, Matterhorn were all iffy to me.  I was adamant about not being forced onto my first looping coaster.  However, just a few minutes later I somehow found myself going through the queue.  I must have been drugged or dazed in some way and I think it was only as I was strapped in and the train started to move that clarity shot through my mind.  I remember saying "Okay, I want to get off now."  And then the reply from my mother next to me, "It's too late for that now."  I am happy now to report that I survived and developed a love for California Screamin' which, as a side note, has now spread to other roller coasters that are even more extreme, such as those that can be found at your local Six Flags.  It still took until 2010 for me to ride Rock N Roller Coaster at Walt Disney World, but that was only because I chickened out in 2007 after a much more frightening experience with their version of the Hollywood Tower Hotel.

As I grew older and became more integrated in the online Disney fan base, I started to realize some of the problems that the park had.  It wasn't the Disney Theme Park that it was meant to or should have been.  And even though I am extremely pleased that Disney suits have put so much effort forth to correcting this park, and even though I enjoy the new experience and cannot wait until I can see all of the new additions in person, I still was sad when they tore apart my childhood.  I was losing something familiar, like a friend I had had for a long time and only saw once a year.  Those CALIFORNIA letters stood stalwart to greet the guests.  Grizzly Peak roared up at the sky as he always had.  Mickey greeted me from the roller coaster and the sun smiled from the ferris wheel, instead of the other way around.  And the golden sun at the entrance welcomed me back to my second home, just as much as the train pulling in at the station across the way or the gleaming monorail whizzing past overhead.  I don't want people to think that I only remember DCA or that I don't like Disneyland.  Much of the same is true of that park, which is near and dear to my heart.  But it's DCA that has changed dramatically to me, the things that I once took for granted are no longer there.  I love Disneyland and Walt Disney World, I have wonderful memories from all of these parks that I have had the chance to visit.  But it's these pictures in my head of a "broken" park, these are the memories I cherish, despite their imperfections and blemishes.  This is what I remember.  This is what I grew up with.  This is my childhood. 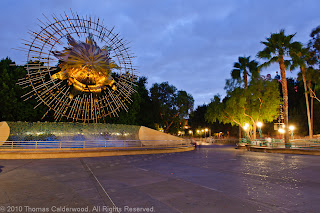 While I was working on my "supermegaawesomefunny" post recently, I noticed that I needed to change a few things on the template so the YouTube video widths would come out nice. Anyway, before long I had committed myself to a complete overhaul of the design of the blog. It'll probably still receive a few tweaks over days/weeks/months/whenever the heck I get around to it/etc. You guys know how fast things get done around here...
Anyway, I'm just looking for a little feedback on the new design. Any comments at all?
Posted by Rikua at 1:00 PM 1 comment:

So, today, March 13th, is my sister's birthday, and since she is the most awesomeest (is there two e's in that?) sister that I've ever had, I should celebrate this momentous occasion with a "YouTube supermegaawesomefunny Mega Post" (also, am I allowed to trademark that? Because I might if I can...)
Anyway, I'm not usually one with the ways of the YouTube, but in this case, I've had a crash course in finding secret gems among the millions of wasted video hours (which means I've searched through my history to find some funny stuff for you. But mostly for my sister. Since she's the only one who reads this blog.)
So, PRESENTING........
[drumroll]
MY YouTube supermegaawesomefunny MEGA POST!!!! (insert Kermit the frog "yay" here...)
Oh wait,
Ah, poor quality. The weakness of most YouTube uploads....
And speaking of weaknesses,
Hm, that one turned out much bigger....I don't think I was expecting that.
And speaking of something being bigger,
[offstage Monty Python voice] NO NO, WE'RE NOT GOING THERE!!
Ugh, Fine. But now for something completely the same; a man with three buttocks. [telephone rings] Yes? ... Oh, okay. And now for something completely different, a man with nine legs.
[offstage Monty Python voice] HE RAN OFF!
How 'bout a madman with a box?
I just have to say for the record that I've become a Whovian since last summer (August or so) and the Eleventh Doctor is my favorite. And this is my favorite short from the Complete 5th Series set.
There's also this one:
And this one:
Heh, hiding a euphonium...
And this one's pretty good, a meeting of the 5th and the 10th Doctors,
Is this getting a little long? NO, NEVER! WE MUST FORGE ONWARD!! But maybe I'll stray away from the Doctor Who for now.
Tonight's story in The Twilight Zone is somewhat unique and calls for a different kind of introduction. This, as you may recognize, is perhaps the funniest animated short film ever.
Not that you have to disprove me on that, I'm fairly happy in believing it is whether or not it actually is.
This next one needs no introduction.
.
But it might need an explanation. Too bad I'm not about to provide one.
The next three videos are something that was shown in my computer programming class at college, and are an appropriate setting for this hilarious trilogy. Actually, the first one isn't really funny, but the second and third ones are.
While I do believe I'm on a roll right now, this long post is starting to slow down my computer, so I think this amount of bandwidth drain will be enough for now. And since this post was started for a particular reason (if you didn't remember that, then you are required to scroll back to the top of the post before continuing), I'll leave with this one last video that I made for my sister when she was going back to Walt Disney World in the summer of 2010.
(Yes, that was a misspelling in there, good of you to spot that. And then make fun of me for it.)
Love you Sis!
Posted by Rikua at 10:57 AM 1 comment: