I have recently uncovered these pictures and video of the new Fantasmic! dragon (known as Murphy or Bucky among staff). Scroll down for my comments. 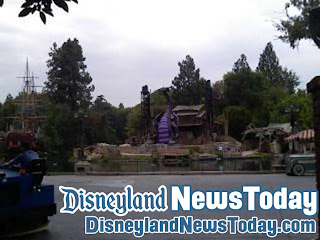 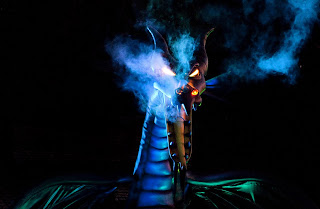 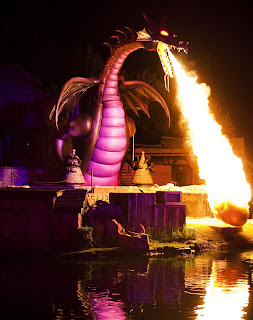 I couldn’t wait to see anything of this new dragon, and it looks amazing. I’m sure it looks much better in person, so I can’t wait for the public debut of this amazing new animatronic. There was a preview of the dragon scheduled for this morning that would show off the new dragon for the press in preparation for its debut hopefully that night. However, the preview was cancelled at the last minute, and there is no word as to when the dragon will debut. By the looks of this, it will almost definitely be in the next two weeks. My only wish is that it moved a little bit more, and that the sword effect was a little more impressive. I have heard word that the effect will be more elaborate, but it doesn’t seem much better in the video. Thanks to Disneyland News Today and MiceAge/MiceChat for the info and MousePlanet for the Video and Pictures. Now if you’ll excuse me, I have a trip to plan for October...
Posted by Rikua at 6:53 PM 1 comment:

Happy *late* Blogoversary, and Other Things

Whoops, guess I missed this one.... Apparently my blogoversary was June 8th, but I completely forgot about it. Not that I've had much going on during the past year that would prompt me to remember. Or that I've really had time to post this summer.

Anyway, I start school tomorrow, and it really seems like I won't have time to update this blog. I know I say that a lot, but I'm just warning you guys. I'm not saying I won't be posting, but I'm not saying I will be either. Its up in the air at this point, but I will post interesting things that I find out during the year, as well as whenever I have time to.

The original point of this post was to talk about movies and what I've seen over the summer and what I've though about them. However, its been lone enough that it really doesn't matter any more. However, I was also going to update you readers on the going-ons surrounding the new Tron movie I showed a trailer for back a ways. Its now know as Tron Legacy, and its hoping for a late 2010 release. An updated HD version of the trailer can be found HERE, as well as the homepage for the viral marketing of the movie HERE. You can find out a bit more about what they've been doing with this movie if you check out these posts and this movie.

Guess that's all the time I have right now. Hopefully, I can post something else later.
Posted by Rikua at 7:56 PM No comments: